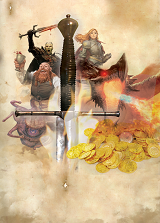 "... On the right flank the 197th Legion was arrayed against the 194th Phalanx. The 117th Dragon took of and attacked the 194th Phalanx without any mercy. In this fight the standard of the 197th Legion was taken in a surprise attack. Some were disheartened but other were driven to higher efforts to take back their flag. The 197th Legion fought well against the 194th Phalanx but was driven back..."
"... Spring was replaced with the beginning of summer. I went to the Tomb in order to vanquish the monster that inhabited the lair. I met the Vampire and unsheathed my Psychic Flail. Waving my arms I also organized the forces of supernatural magic to cast a spell of Holy Symbol. A cross-shaped mist started to form around me. The spell made the Vampire howl in agony, inflicting 9 points of damage. The spell of the Vampire was broken by the event. Raising my hand above my head I cast a spell of Psychic Blast, throwing psychic waves of a stunning force against the Vampire. The Vampire was dazed, unable to gather his mind..."

Adventurer Kings is a game of strategy as well a an adventure game as shown in these 2 extracts of a game report, the best in its category according to Flagship and Paper Mayhem magazines.

You goals can be diverse: become Emperor with the help of your armies; roam the world in order to defeat the monsters hidden in their lairs and get their treasures; become renowned for your wisdom and get the most envied title of Great Chancellor of the Empire; or any other of the numerous possibilities...

In the "Standard" game you will find: